• 33 million people affected by devastating floods in Pakistan – 15% of the population
• ShelterBox Australia is launching an emergency appeal to help people survive the devastating floods
• Powerful flash floods have ripped through large parts of the country, taking people’s homes and livelihoods
• The charity’s largest response to flooding was in Pakistan in 2010

The international disaster relief charity ShelterBox is sending an emergency response team to Pakistan following severe flooding on a scale not seen since 2010. It’s launched an emergency appeal to help people survive the deadly floods that have left a third of the country underwater.

More than 33 million people have been affected after fierce monsoon rains deluged vast parts of the country, with flash floods sweeping away people’s homes and livelihoods. The need for emergency shelter is staggering.

“The humanitarian need in Pakistan is on a scale not seen since the worst flooding in living memory in 2010 and the situation is sadly only going to get worse with millions of people displaced and left homeless.

“The need for emergency shelter is staggering and growing and our team going to Pakistan will be assessing which communities are most in need, what we can do to help them rebuild, and how to get them the shelter support they need.

“This huge crisis is already affecting 33 million people across the country and this number will continue to rise significantly given further monsoon rains forecast this month and the gradual onset of flooding.”

Water ways that feed the main Indus River that runs through Pakistan have burst their banks, flooding large areas of dry land, and leaving people in desperate need of water, food, medicine, and shelter.

The death toll has topped 1,000 and still climbing, and many thousands of people have been left with nowhere to live after their homes were damaged or destroyed.

ShelterBox will have a specialist team on the ground this week, to assess the emergency shelter needs of those displaced by the flooding.

ShelterBox’s Regional Director for Asia, Haroon Altaf, will be deploying with a team this week. He says:

“The flood waters are fast and lethal, and they do not discriminate. They are sweeping away anything in their path including people, homes, and livelihoods – and the monsoon rains are expected to return through September.

“When there is so little dry land, and entire communities cut off, the logistics of getting shelter aid to the people in greatest need presents a complicated challenge.”

Pakistan has 160 districts and 116 of them have been affected by the flooding. Already remote areas are now inaccessible, communication lines are damaged, 150 bridges have been destroyed, and even water transport can be risky with so much debris.

The flooding is the worst Pakistan has endured since 2010, when ShelterBox responded – helping thousands of families with shelter aid, delivered in its iconic green boxes, to help them start to rebuild their lives.

Since then, the charity that provides emergency shelter and other essential items to families across the world who have lost their homes to disaster and conflict has been continuously evolving to better meet the needs of displaced people. It no longer provides aid only in boxes, instead providing combinations of aid that are locally appropriate and packaged in a variety of ways to make a tangible difference.

That’s possible thanks to robust local partnerships with Rotary, NGOs, and local authorities that often help ShelterBox get aid to some of the hardest to reach locations in the aftermath of a disaster.

“This situation in Pakistan is very worrying, coming at a time when other crises around the world are drawing both attention and resources. The damage to infrastructure and the widespread nature of these floods will make a response very challenging but we are confident that with our experience and expertise, we’ll be able to reach those most in need. The Australian public are very aware of both the short-term and long-term effects of flooding, and I urge them to respond generously to help the people of Pakistan.”

As well as sending a response team to Pakistan, ShelterBox has teams working to support communities in Ukraine, Yemen, Burkina Faso, Mozambique, Syria, Cameroon, Ethiopia, and Nigeria.
To find out more about ShelterBox and its work in Pakistan visit www.shelterboxaustralia.org.au

• Archive images and b-roll from ShelterBox’s 2010 response in Pakistan available on request.

ShelterBox provides emergency shelter and other essential items to families who have lost their homes to disasters. With operational headquarters in Cornwall, the charity also has 14 affiliate organisations worldwide.

The charity has been Rotary International’s project partner in disaster relief since 2012. ShelterBox has supported more than 2 million people since it was founded in 2000. Plastic pollution concerns everyone. Over the last few years at ShelterBox, we have made huge efforts to reduce the amount of plastic we use.
Read Post 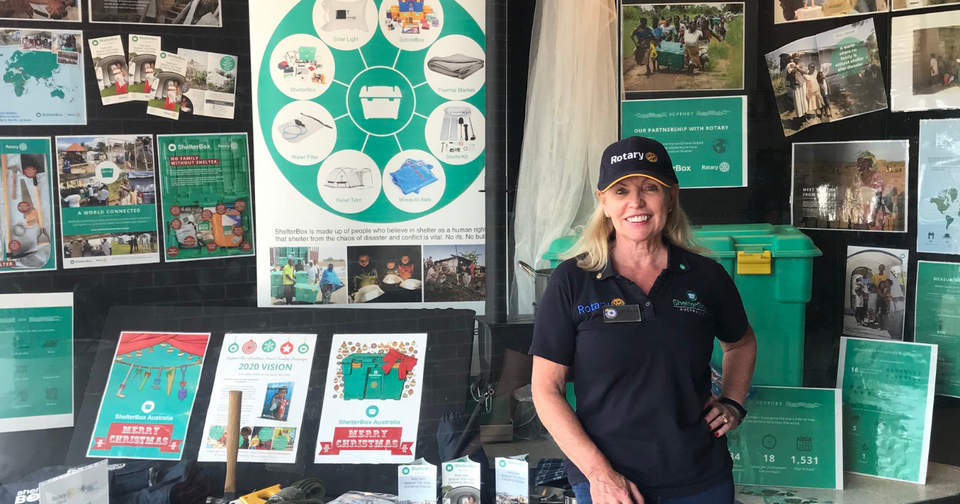 Introducing ‘Humans of ShelterBox’ — a new spotlight series highlighting some of the incredible individuals who make our disaster relief work possible around the world.
Read Post
Show more